Synopsis: Lydia Martin has always had dreams, the weirdest and hottest of them all involving a faceless, muscle-bound man that speaks like sin and smells like sex. Like any sane person, she always put the dreams down to an overactive imagination, coupled with a higher than average libido. One night, however, instead of their usual, erotic encounters, she finds him in her dream, chained to a wall and screaming in pain. Not only that, but she thinks she recognises the building he’s being held captive in as one that’s just a few streets away. Awaking with an irrepressible need to save her fantasy lover, Lydia decides to humour her dream self and head on over to where she thinks he’s imprisoned. What unfolds is beyond even her wildest imaginings, as she’s sucked into a dangerous and deadly world she never knew existed … and it turns out that the man who inhabits her darkest fantasies, isn’t the only one that needs releasing…

NWW Review: Behold a long-awaited Paranormal Romance series which takes place in the Old Country, in the beautiful surrounding of the Surrey Hills (if you know of any other, please let me know). I must say that when I have started reading it immediately felt homey. But not only because of its geographical location and the use of British English. It is also apparent in the way the characters are described. There is no exaltation, no striving to show the extremes. Pain, suffering, loneliness – these emotions are raw, unadorned and powerful in their own right. I found it refreshing that Hardy does not feel the need to hyperbolise them even further just because the people experiencing them also happen to be werewolves. This emotional turmoil is described sparingly, and in a reserved manner. This allows the Reader to better experience them for themselves and to become part of the story. In other words, by transferring the emotional drama into the Readers’ heads and engaging their imagination, they become more attentive and personally involved in the story. This somewhat reserved manner of writing does not affect the erotic content of the book. The sexual tension is unbearable, the passion is raw and all-consuming. Just like Nudge Wink Wink likes it. 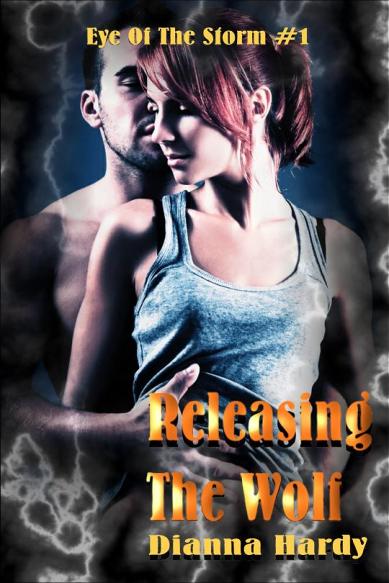 The werewolf mythos is captivating and described with a good attention to detail. I will be devoting a separate post to it as I have got a bit carried away by the Author’s twist to the old tale and allowed my ‘scientific’ side to take over. In short, prepare yourselves because this is not your average cotton-candy, pastel-painted picture. The Author very thoroughly described the interactions within a pack, very animalistic and definitely not what you would expect in your average PNR. She makes us question the border between a man and a beast. Can we selectively choose only what we find arousing and readable about a beast or should we accept the ‘whole package’?

Another difficult topic raised by the Author was the idea of previous spouses/mates. It is all relatively easy when a man/a woman is a virgin, never loved, never experienced the earth-shattering orgasm shared only between two (or more) fated mates. But what if one of them has a past? What if their heart has already belonged to someone else and was broken? We see that clearly in the Hardy’s creation of Taylor, the good guy of the pack and the only wolf who was turned not born. On the same night when he was attacked by a rogue werewolf, he lost his humanity, a loving wife and all his friends and family. A perfect getaway. A clean cut. A fresh start. All memories of his earlier life erased from the memory of his friends and family. But he still remembers and suffers every full moon experiencing the need to copulate yet still feeling the need to be faithful to his wife from the time before. And failing every month. It was heart-breaking to read that even when he sleeps with Lydia, who as we later learn was his fated mate, the first word that comes to his mind is “adulterer”.

But the other two werewolves, Ryan and Lawrence, are no less scarred, lonely, each carrying his own luggage, each partially living in the past. So when on a fateful night of the full moon all three of them are bound to Lydia in a thunderous claiming ceremony, their fates become irrevocably intertwined and things will not be the same again. And at this point I have to abandon the sober tone because when it comes to this foursome and the whole aspect of the ‘day after’ and ‘happily ever after, I must admit that the Author absolutely outdone herself. I can’t remember when was the last time I was reading about the heroine actually feeling disappointment after being joined with her long-awaited dream lover or when the three gorgeous werewolves were forced to share their one, fated mate against their instincts and upbringing. So fabulously devious! But the latter is more a story for Book 2 (Cry of the Wolf) which I devoured even quicker than Book 1.

The first two books in Dianna Hardy‘s paranormal series, Eye of the Thunderstorm, are currently available from all major bookshops. Book 3 (Heart of the Wolf) is coming out around December 2013 and we are hoping to review it here at Nudge Wink Wink. 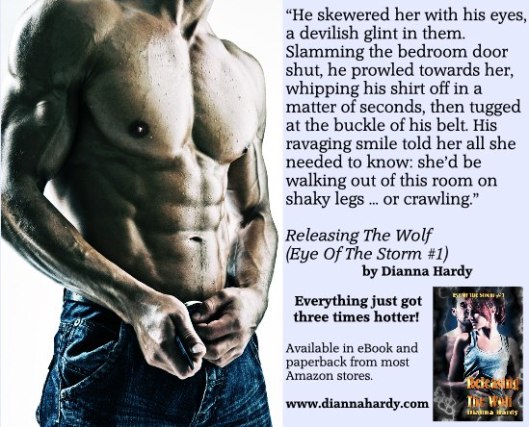 3 thoughts on “Releasing the Wolf by Dianna Hardy”