Synopsis: Kat’s boss wants dirt on the NSO. She is sent to Homeland undercover but everything goes wrong as soon as she enters the front gates. She is arrested by a big, powerful, sexy New Species but she is not frightened. He turns her on and things heat up fast between them. Now, she just hopes he doesn’t break her heart.

Darkness admires Kat’s courage but he cannot trust anything she says. He hasn’t been with a female for years because he knows he is too damaged. He is not mate material, despite his desire to possess her in every way. Darkness fears losing control—the one thing that defines his life. He doesn’t think he can tear down the protective walls he’s built, even for her. 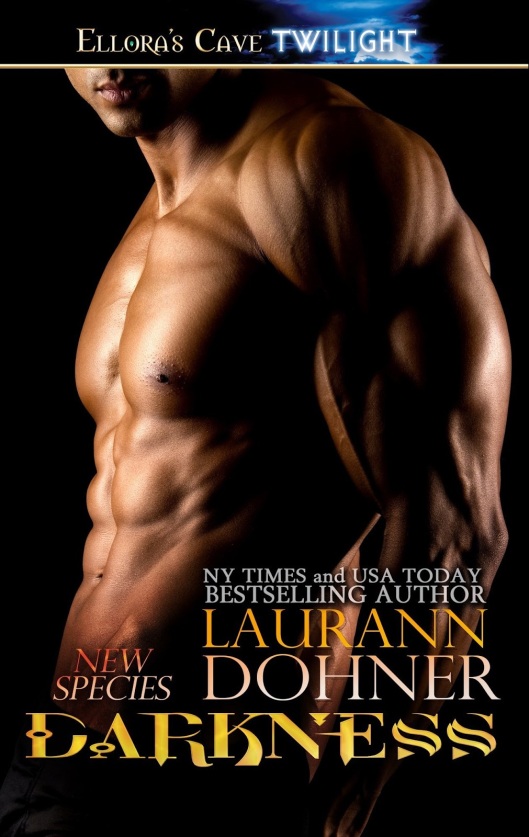 NWW review: This book, a twelfth instalment in the New Species series, is devoted to the enigmatic Darkness who we were slowly introduced to in the previous books. And if you have been devoted to the series as I have been (through thick and thin as it were), I am sure you were very eager to hear his story. All that dark brooding, absolute control of ones emotions, hints of violence and excruciating past which shaped Darkness into one of the best soldiers, skilled in the art of torture and interrogation techniques. I was actually so impatient that I bought the e-book from Kindle just because Amazon released it a day before Kobo did. Self-control is not one of my strengths as you might have guessed.

I suppose my overall feeling is that I wish I could like the book more. There are a few aspects which I found lacking: the timeframe, the wordiness of the story and the promise of kinky sex which the Author doesn’t fulfill. Let us start with the time frame. As is so typical for this genre the story takes place in a very short time, probably no more than a few weeks at most. Would it hurt anyone if it was extended to a few months? Let those emotions brew for a bit, and you might find that those stories will be much richer and the love – truer. Because by the end of the day, how can you truly trust attachments formed amidst all those explosions, kidnappings, and assaults? When you fit them all in a couple of weeks’ time frame – it makes for one hellish and stressful ordeal. It can result in a casual fling but lasting love? It just doesn’t feel true. That is why I keep coming back to books like Slade or Brawn and Obsidian. I remember reading that scene at the end of Obsidian, when after 3 months the two main characters see each other again after a forced separation. You can literally feel the emotions boiling hot underneath that pretended ‘cool’. All that love, loneliness and longing from being apart from their loved ones made me cry.

The other aspect which aggravates me not only in Laurann Dohner’s book but in many other authors as well, it this tendency of using too many words and repeat herself throughout the book. Sadly I found myself skipping ahead through the bits of plot which I was already familiar with (I don’t suffer from amnesia so I don’t have to be told the same thing three times) just to stay interested. I mean, was there a specific number of pages she had to reach? Because the book would be way better if 25% would be just removed, shortened, sharpened. For example, why are we learning twice about Darkness’s past? First time was brilliant, but the second time feels rehearsed and meaningless which cheapens the experience and my satisfaction from reading the book.

Lastly, the promise of kinky sex. Perhaps if that was the first Ellora’s Cave book I have picked up, I might have been satisfied. However, having read considerably more books on ‘all that is kinky’, I felt my excitement deflating. Was I to be treated to only one sexually stimulating scene in the whole book? After which we are back to handcuffing the girt to the bed and that is about it?

But the book is not all bad and there are bits which I have genuinely enjoyed. And these are simply Kat (Katarina) and Darkness. He is completely closed off, distrustful or everyone and everything, trapped in his past, uninterested in the world around him. An epitome of a broken male. She is brave, sassy, foul mouthed. She stands up to Darkness all the time, keeps him on edge, guessing and intrigued. She is trying to get him out of his shell. Her verbal sparring with Darkness is great to read even if at times I just wanted to smack her to bring some sense into her head. But let’s face it Ladies – we are a bit irrational from time to time so it is not surprising that our heroine goes off rail as well. I think the fact that she actually stays with Darkness throughout the emotional roller-coaster is admirable and shows the depth of her faith and love. And believe me dear Readers, Darkness is one complicated and irritating male specimen. Their story is unique in the fact that until the very end Darkness plays hard-to-get, not allowing Kat to get too close, blowing her off then forcing her into triple orgasms, all the time struggling with the flashbacks of his past. It takes one determined FBI agent to pin him down. Is he worth it – well it is for you to decide.

Summarising, regardless of all those shortcomings and all my moaning, I have just devoured the thirteenth installment of the New Species series, Smiley (release date: 28/10/2014) and I’m hoping to read Breeze’s story next (Go New Species Ladies!). I have been trying to understand this complete and utter addiction to the New Species series and I come back empty-handed. There is just something about the world Mrs Dohner has created, something intriguing, seducing and deliciously dark and inviting, that I just keep coming for more.